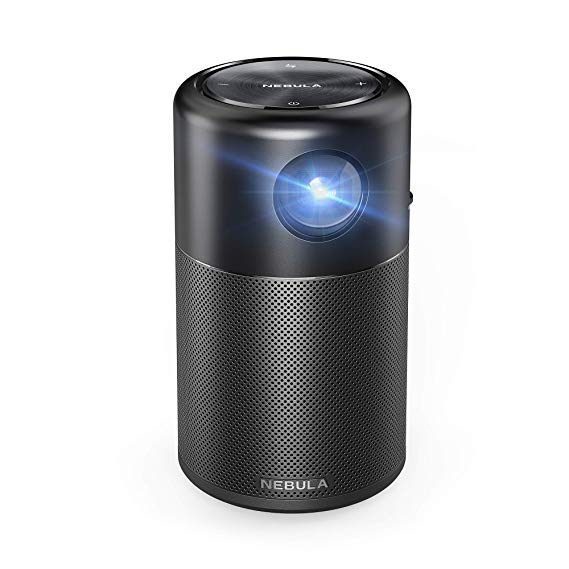 The first thing you’ll notice about the Nebula Capsule when you take it out of its box is its design – it’s a nice-looking product. It’s about the size of a drinks can, with a series of controls on the top, and a micro USB port, HDMI port and speaker on the side, along with the lens and a keystone correction control. 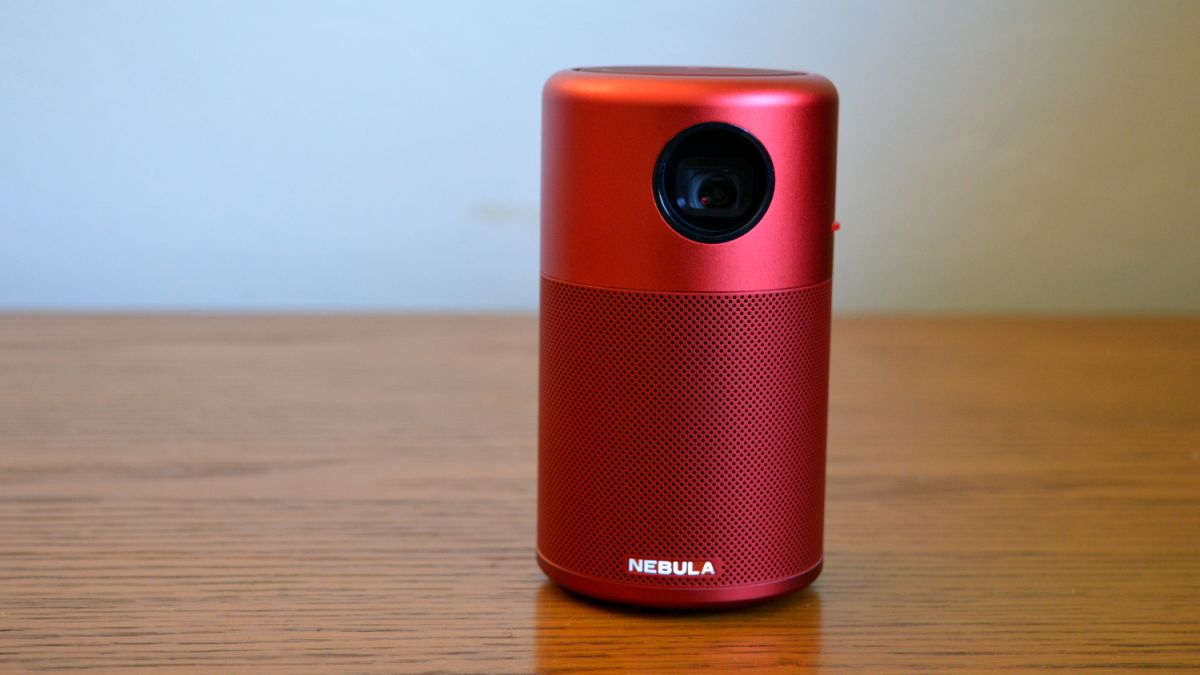 We actually really like the look of the Capsule. It’s built for portability, and as such you’ll find a carry bag in the box with it, along with charging accessories and a remote. The remote is pretty basic – there are directional buttons, selection buttons, volume controls, and a power button, so everything you need to control Android. The remote also has a mouse button, which displays a cursor on the screen that you can control – it’s an interesting idea, but we rarely found ourselves using it. 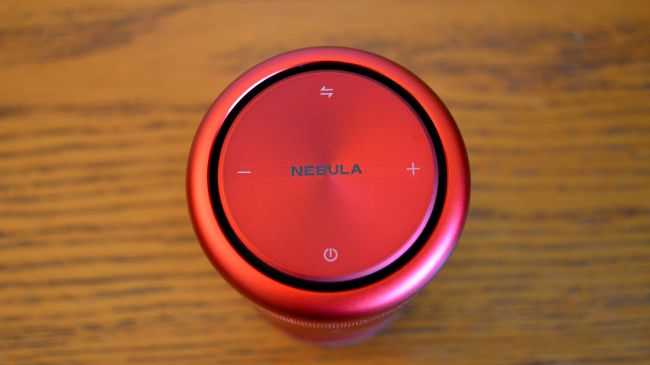 And yes, you read that right: Android. As if a nicely-designed portable projector wasn’t cool enough, the projector runs what seems to be a highly customized version of Android that’s made to look a little like Android TV. We’ll get into the software and how it performs a little later.

The HDMI port is a nice inclusion. While the Nebula Capsule is obviously built to use Android apps, many will want to stream content from their computer or another device. The HDMI port makes that easy.

Under the hood, the projector features a 5,200mAh battery, which is able to power the projector for around four hours. That’s not bad at all – it means that if you’re diligent about keeping the device charged up it should always last the duration of a movie.

The remote, as mentioned, is pretty basic, but that’s not a bad thing. What is a bad thing is that it seemed like the projector often didn’t register us pressing a button. That was especially true, for example, when we pressed it twice quickly – perhaps to type a double letter. In the end we got used to having to press down a little harder and slower to get the desired results.

When you first turn on the device you might be a little surprised by how loud it is. It makes sense that the fan has to cool the unit, and thankfully the speakers can get loud enough to drown out the fan noise, but only when they’re turned up – and you might not want to always be watching TV at super-high volumes. 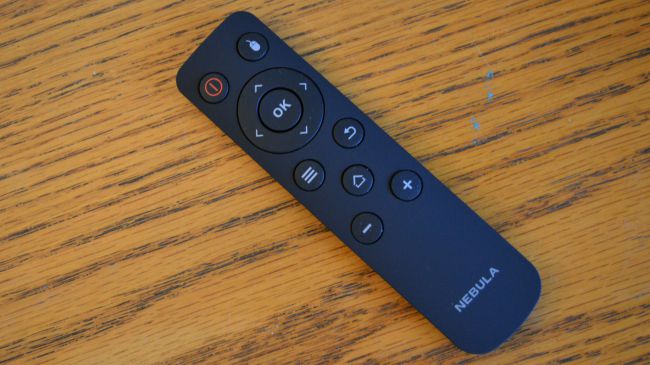 Still, in general the Nebula Capsule is pretty well designed and very easy to set up. This particular forked version of Android doesn’t require you to sign in to Google, so you can switch on and be ready to go.

Running Android 7.1 on a projector is a pretty cool idea, although if you’re a regular user of Android, and particularly Android TV, you might find the experience a little disappointing.

As mentioned, the Nebula Capsule lacks the Google Play Store, so the wealth of apps on Google’s marketplace are absent. When the Google Play replacement, Aptoide TV, runs properly (which it often doesn’t), you’ll be able to find some of the major apps that should be there, including Netflix, Plex, and Hulu, but other apps that you might want to enjoy, like Sling TV, are missing. 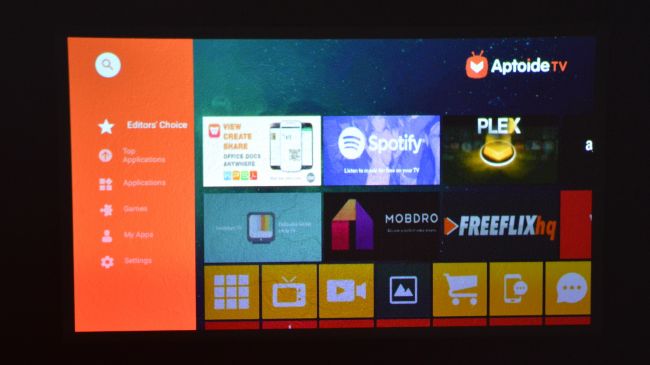 Thankfully, Anker has a built in a file manager, enabling you to download the APK for your favorite apps and then install them through the file manager. What that means is that with a little time and effort, any compatible Android app you can download should be one that you can use on the Nebula Capsule.

The software is sub-par in other aspects too, and here it’s really the small things that count. For example, when you’re typing, autocomplete suggestions pop up under the search bar, as you'd expect; the only problem is the software simply won’t let you choose from those suggestions, rendering the entire purpose of autocomplete useless.

You also might want to download the Capsule Control app on your phone. Why? Turns out the version of the Netflix app on Aptoide TV may be the version built for smartphones – when you first open Netflix you’ll be greeted with a notice telling you that this version of Netflix 'doesn’t support the physical remote control.'

If you don’t mind such quirks and can find all the apps you might want, using the software is a pretty simple experience. It basically works the same way Android TV does, with a grid-style layout.

The Capsule Control app works pretty well too. Once you download the app you can use your phone as a kind of trackpad and remote for the Nebula Capsule, which is far easier than using the included remote.

Of course, the main thing you need a projector to do is, well, project, and in this respect the Nebula Capsule is a solid option. The projector supports a display size of up to 100 inches, which isn’t bad. Of course, at that distance, things like resolution and brightness suffer, so you probably won’t want to go that large if you don’t need to. 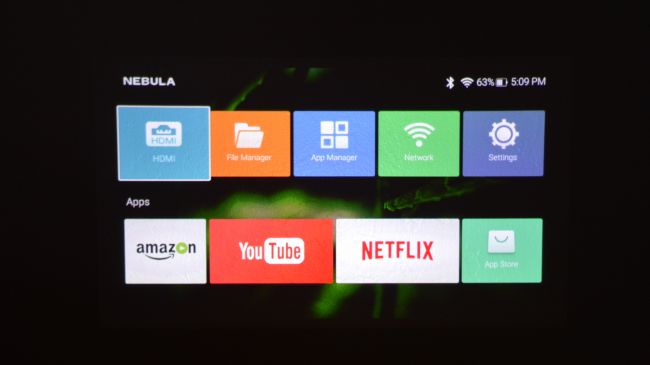 Smaller projectors often have a tough time when it comes to resolution, and the Nebula Capsule is no different. The resolution comes in at 854 x 480, which is pretty low. Thankfully, if you’re sitting at least a few feet away you generally shouldn’t notice the low resolution. We did most of our testing with the projector positioned around 6-8 feet from the wall, seated around 2 or 3 feet back from it, and watching content from Netflix was a comfortable and enjoyable experience.

Then there’s the brightness, and once again it's an area in which smaller projectors often suffer. The brightness comes in at 500 Lumens, which is fine for darker rooms, but not great if you have the lights on. You’ll want to make sure you can achieve a relatively dark room when you’re using this projector, otherwise you may not be able to properly see content.

Because the projector has a built-in speaker you’ll also want to think about audio quality, and what we found – and which kind of surprised us – is that the speaker can get pretty loud for such a small device. 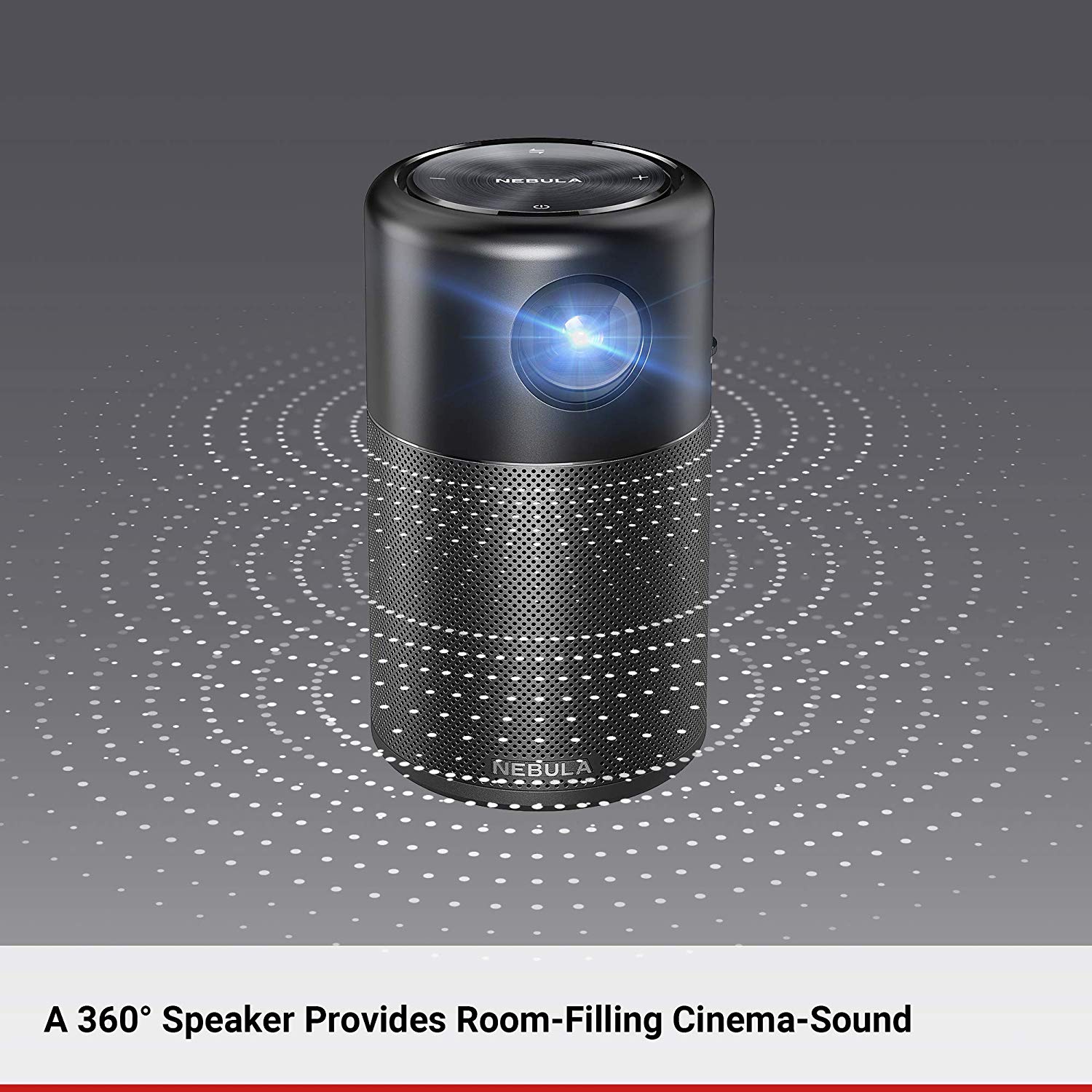 Now, don’t confuse loudness with quality. While it’ll be fine for most, it’s certainly not the best-sounding speaker on the market. Bass was there, but it didn’t extend very far, while there seemed to be a slightly annoying boost to the high-mids, which is often the case with a relatively inexpensive speaker.

Thankfully, if you don’t want to use the speaker you don’t have to – the projector supports connecting to Bluetooth headphones and speakers, and while you may experience some lag this seemed to work pretty well in our testing.

The Nebula Capsule surprised us in more ways than one. It’s actually a pretty handy little device. We love the concept of an Android-powered projector, and the fact that it has a built-in speaker and offers wireless control through the phone app makes it a very sold all-in-one solution. 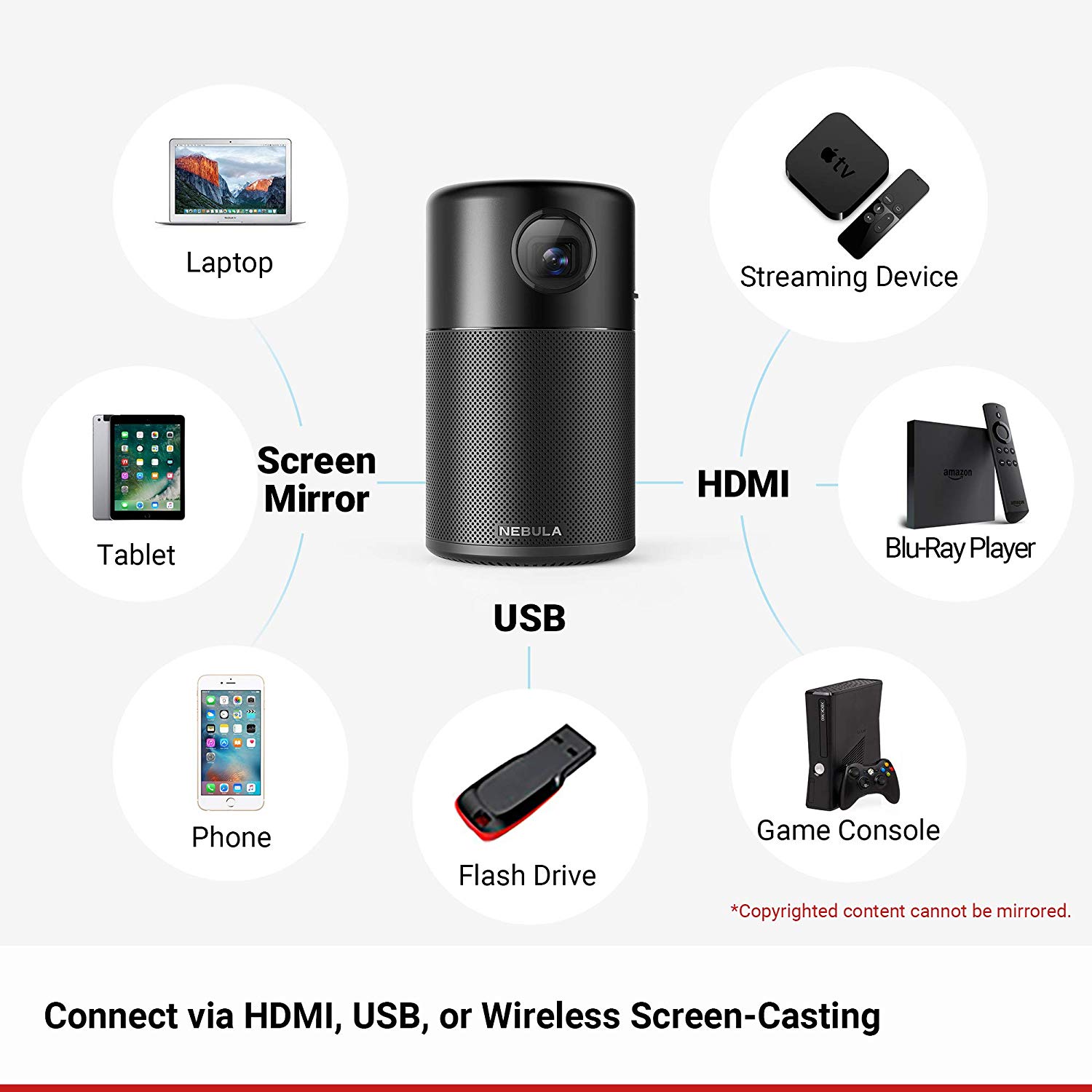 But there are some serious downsides. For starters, the software isn’t great. We assume the device simply isn’t certified to use Android TV or the Google Play Store, and while we can live without the former, the latter is a pretty necessary aspect to any Android device. Sure, there are workaround – but there shouldn’t have to be. There’s also the resolution and brightness, and while both being relatively low isn’t unexpected for a projector this size, it’s still something you’ll need to consider. 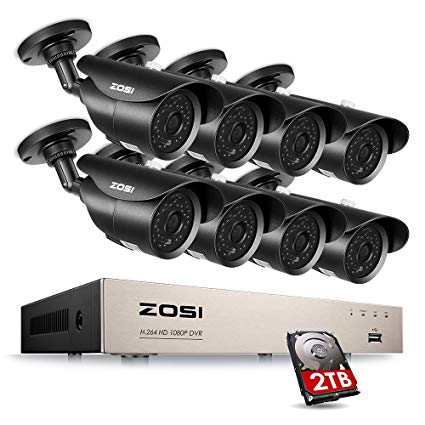 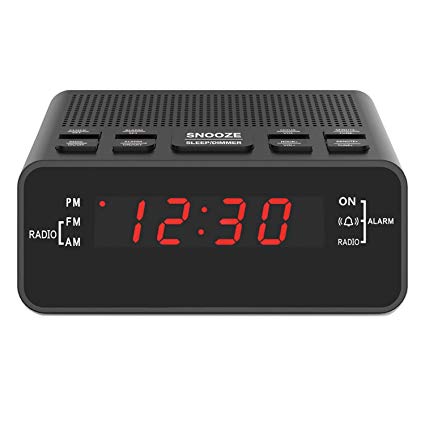 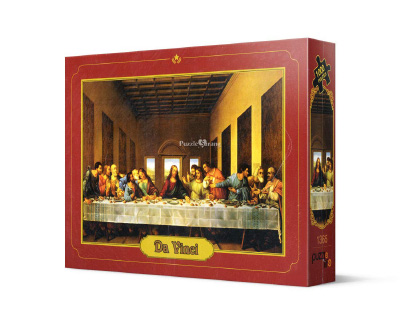